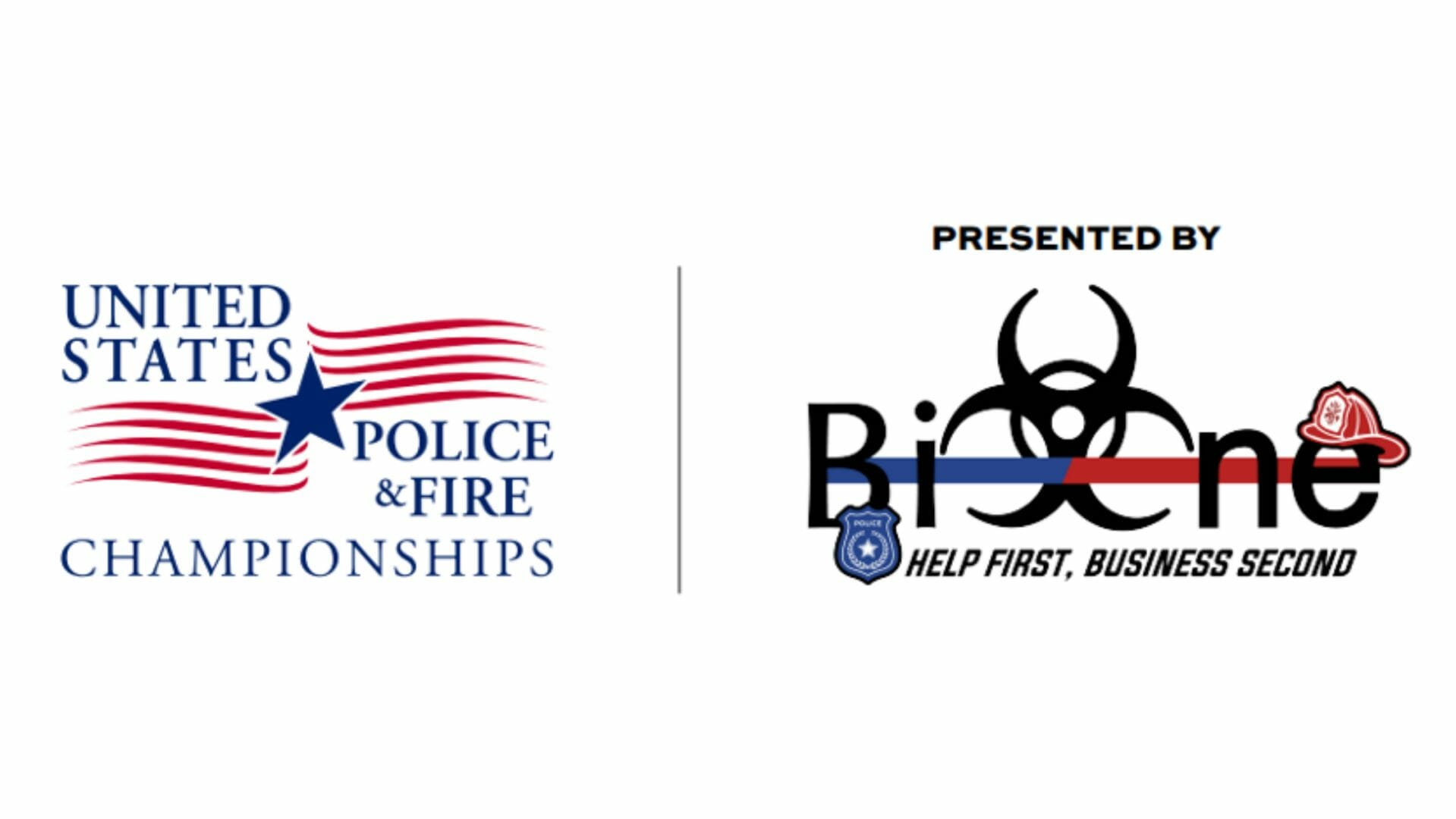 Operating under the motto, "Help First, Business Second," Bio-One provides high-level decontamination and biohazard cleanup services while offering clients the privacy and compassion needed at difficult times. Bio-One operates in 41 states with over 110 locations and is committed to providing first-class service.

"We are thrilled to add Bio-One as the Presenting Sponsor for the 2021 USPFC because   First Responders warrant our support," said California Police Athletic Federation President LC Collins. "Bio-One’s reputation is second to none, and with their partnership, we can offer first responders a health and wellness outlet.  We look forward to working with them for years to come."

The USPFC caters to active and retired public safety and first responders who participate in Olympic-style competitions and open to individuals representing firefighters, law enforcement, and officers from corrections, probation, border protection, immigration, and customs across the country. Traditionally athletes compete in 45+ sporting events from biathlon to motocross across 35+ venues in Southern California.

"At Bio-One our support for Law Enforcement and Fire Service Officers is unwavering, and we're thrilled to partner with the California Police Athletic Federation during this memorable event," said Nick-Anthony Zamucen, founder of Bio-One. "We wish each athlete success and look forward to celebrating these everyday heroes."

The 2021 USPFC Presented by Bio-One will take place from June 10th to the 19th in venues across San Diego, California, and strengthen the relationship between First Responders and the community for many years to come!

About the United States Police and Fire Championships

The California Police Athletic Federation (CPAF) is the parent organization of two multi-sport programs designed for peace officers and firefighters. The World Police & Fire Games (WPFG) are open to active and retired law enforcement and fire service personnel throughout the world. The United States Police & Fire Championships (USPFC) are open to active or retired public safety and first responder personnel from an eligible agency within the USA. For more information, please visit www.uspfc.org.

On the morning of 15 February, 2018, Bio-One Savannah received a call from a patrol Sergeant with Garden City Police Department, who our sales representatives had recently contacted with information about our services. The patrol Sergeant told us that he would be passing our information on to a local business who would most likely contact us soon after. The following morning, Bio-One Savannah received a call from a local Motel regarding a death that had occurred in one of their long-term rented rooms. 90 minutes later, Bio-One Savannah was on scene with all of our equipment and chemicals.

Upon arrival, the owner of the motel explained to us that the tenant was a Marine veteran who had fallen in his room, sustaining a significant wound to the head, bleeding profusely as he moved about the room, and then eventually he collapsed and perished on the floor. As a veteran owned and operated franchise, this situation hit home very strongly for Bio-One Savannah, as do all other veteran deaths. Unfortunately, since he was a quiet man who kept to hself and had no local family, so he was not found for 8 or 9 days after death, according to the coroner’s estimation. During this prolonged period, the situation changed from a biohazard cleanup to also requiring odor remediation.

Bio-One Savannah’s techs immediately suited up in full PPE and got to work, remediating all surfaces contacted by any potential biohazard, removing a contaminated mattress, parts of the baseboard along the wall that had been contaminated, and several towels and clothing articles that had clearly been used as bandages as the tenant tried to tend to his wound. Bio-One Savannah also had the unfortunate duty of properly disposing of various clothing and porous items that had absorbed the smell and would therefore be both unsafe and emotionally difficult for the departed’s family to take possession of. Before disposing of any personal items, Bio-One Savannah made sure to sort through them to find anything of apparent sentimental or real value and doing everything possible to salvage those items so that the family may have them, including some of the tenants Marine Corps uniforms. Sadly, some items were simply beyond salvaging and had to be properly disposed of as biohazards.

Once all contaminated surfaces had been treated with Bio-One’s proprietary multi-step chemical process, Bio-One Savannah proceeded to treat all porous materials in the room that could have absorbed any odor with our enzymatic cleaning agent and acid wash, which included the entire drop ceiling, all carpets, and the curtains. Once all porous surfaces had been treated with those two chemicals, Bio-One Savannah proceeded to use an anti-odor fogging machine to ensure successful odor abatement. Once finished with the fogging process, to be even more certain that the odor would not return in the future, Bio-One Savannah sealed off all vents and possible air passages to other rooms, set up our industrial ozone machine, and allowed it to run overnight.

Upon returning the following morning, Bio-One Savannah found that our procedures and methods learned during BOTS certification had worked spectacularly, and the odor was no longer present. The owner of the motel was ecstatic with the outcome and very happy to have our information for his future needs, stating that two years prior he had been charged over twice our price for a less extreme situation by another cleaning company, and the odor still lingered for months afterwards. Bio-One Savannah’s techs left the scene with pride knowing that the family of the fallen veteran would never know of or be able to detect the scene or odor that we had cleaned up, as well as with the knowledge that we were able to help a local small business in need who had been taken advantage of in the past. People first, business second.

On the morning of 9 February, a local property management company located in Hinesville, Georgia, which is about 45 minutes away from Bio-One Savannah’s headquarters, contacted Bio-One Savannah regarding an odor issue in one of their properties. Bio-One Savannah was on scene to assess the situation and begin the free estimate process roughly two hours after the initial call came in. The tenant of the house had only recently moved in, and as the first two weeks passed by, there began to be a stronger and stronger odor of dog urine emanating from a sunroom that was an addition onto the original structure of the home. The property management company informed Bio-One Savannah’s free estimate team that the previous tenant had left multiple large-breed dogs in their kennels for a prolonged period of time in the sunroom. As a result, the dogs had no choice but to urinate through the bars of their kennels and onto the sheetrock and brick walls of the room.

That tenant had been asked to leave and the property management company had done their best to remediate the smell by using a bleach/water solution and painting the entire concrete floor with three coats of Kilz. Obviously, since they did not have the enzymatic cleaners, equipment, or specialized training of our BOTS certified technicians, the odor returned quickly and only continued to intensify with time. Bio-One Savannah’s estimation team quickly deduced that a significant amount of urine had absorbed into the sheetrock and underlying insulation of one wall as well as having soaked deeply into the exposed brick of the opposite wall. After calculating the costs and time necessary to remediate the issue, a free quote was sent to the property management company only a few hours after the assessment was completed. It took about a week for the property management company to approve Bio-One Savannah to begin remediation processes.

Once on scene with all of our equipment and chemicals, Bio-One Savannah’s team suited up in full PPE, steamed the brick, treated it with our multi-step series of proprietary chemicals, cut away and removed all contaminated sheetrock and insulation, then treated all underlying wood framing and surfaces with the same multi-step propriety chemical process as used on the brick. After all contaminated surfaces had been properly treated to ensure that there was no longer a biohazard, Bio-One Savannah treated everything porous with an anti-odor fogging process, sealed off the room with plastic tarps, and set up our industrial ozone machine in order to ensure that there was no residual odor left behind. After allowing the ozone machine to run for approximately 4 hours, Bio-One Savannah returned to the home and safely turned off the ozone and allowed the room to air out properly before re-entering. Upon re-entry, it was clear that the odor abatement procedures set forth by BOTS certification were extremely effective and our efforts were a success. Bio-One Savannah contacted the local office of the property management company that had called us and had one of their representatives come and verify that the odor abatement process was, in fact, successful. Afterwards, we proceeded to the local office of the property management company and were very warmly received and thanked for our prompt response time and professional manner. They then issued us a check for our services and told us they would be contacting us for any future situations in which they required biohazard remediation services. 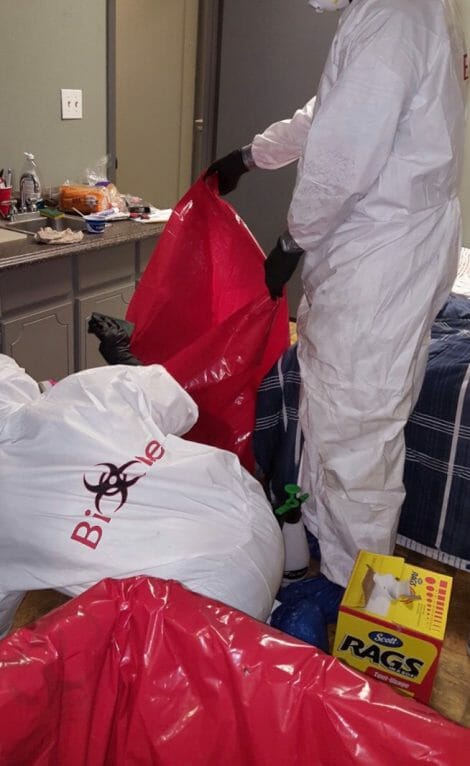 On the morning of 9 March, 2018, Bio-One Savannah was called regarding a biohazard situation in need of remediation. Bio-One Savannah was told only that it was a suicide and that remediation needed to happen immediately, as the scene was in a rental home and the family wanted to retrieve their loved one’s belongings as soon as possible. Bio-One Savannah had a team of technicians’s on site within 90 minutes of receiving the call, only to find out that the departed was a veteran who came from a family of veterans and law enforcement. As a veteran owned and operated franchise, this call struck home for us at Bio-One Savannah very deeply.
Our technicians approached the family outside of the home and advised them not to enter until we had completed our work. The family departed the scene to meet up with other loved ones while Bio-One Savannah worked, knowing that we would call them when we were finished. In close contact with the property owner to ensure that he was aware of everything we were doing, Bio-One Savannah’s team suited up in full PPE and utilized our multi-step proprietary chemical treatment process to treat all surfaces that had been contacted by any kind of potential biohazard. In just under two hours, Bio-One Savannah made it impossible to discern that there had been a firearm death in that home and alerted the family that they could then safely enter to begin collecting their loved one’s belongings.
Bio-One Savannah took with us all signs of biohazard or contaminated objects that could not be safely sanitized, ensuring that we discretely placed all red biohazard bags inside of rolling trash cans as we transported them to the truck, so that no-one in the family ever saw anything that could even remotely indicate what we had just saved them from having to see. Because the departed was a veteran and he had several family members in law enforcement, Bio-One Savannah’s technicians voluntarily put in our time on scene instead of charging the family for it, significantly reducing the cost of our services. There is nothing that can bring back their family member or properly describe how deeply we appreciate and support our veterans and law enforcement, but hopefully that small gesture can help to make that very trying time a little less stressful for them. Bio-One Savannah is currently attempting to locate programs through the local Veterans Administration that offer grief counseling to the families of fallen veterans so that we may offer those direct contacts to in the future.

Request a service from your local Bio-One team.